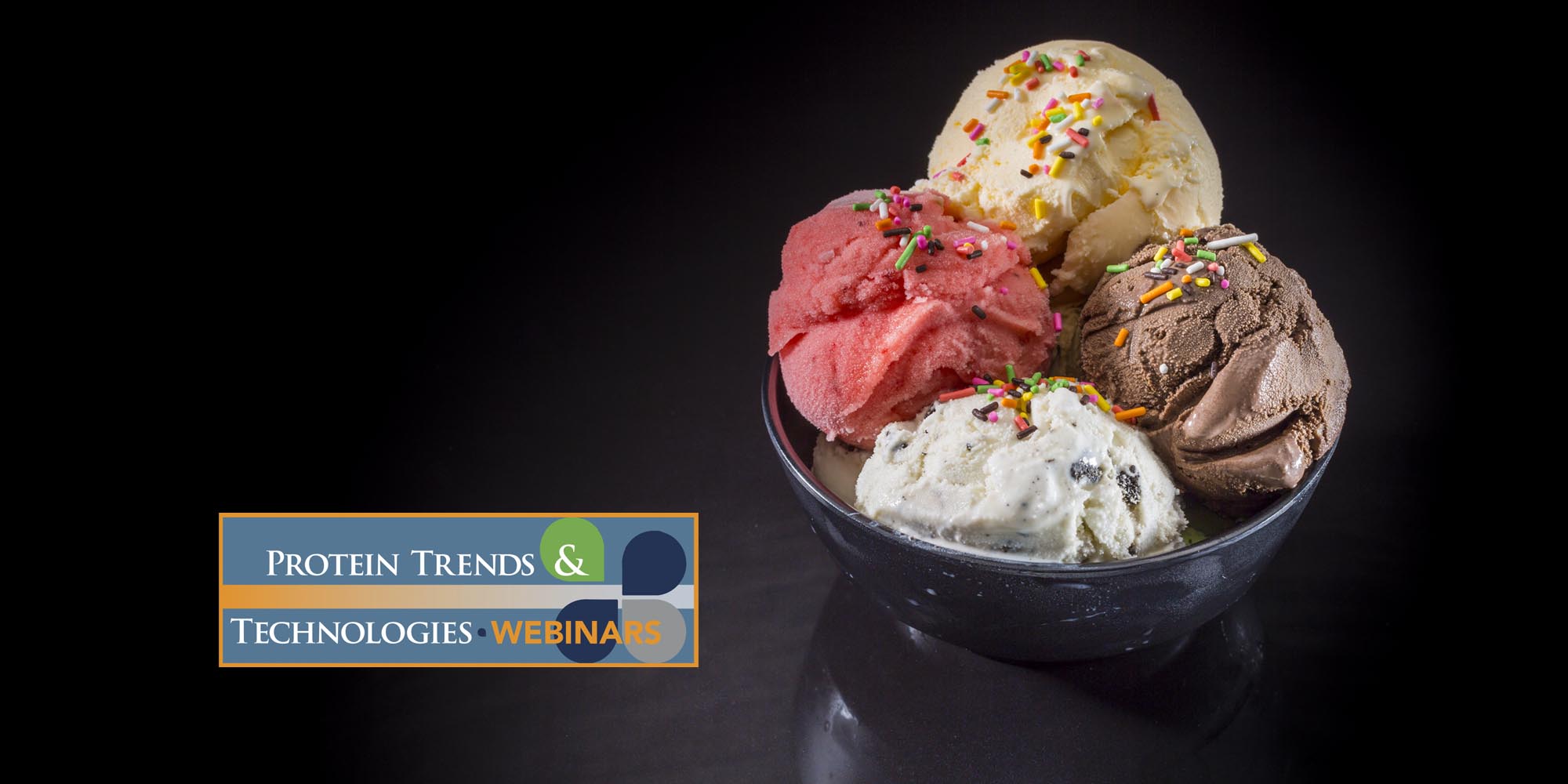 Ingredients used in any formulation are important regardless of the finished product, but the types and amounts of ingredients used in formulating high-protein ice cream are particularly critical in achieving the desired outcome.

Harsh conditions during processing distribution and storage create the potential for quality issues—affecting both sensory attributes as well as physical ones. As such, a formulations’ ingredient functionalities play a critical role in creating a high-quality finished product that will remain so throughout its shelflife. These functionalities include hydration, freezing point depression, stabilization (e.g., air cell stability, shape retention, etc.), emulsification, partial coalescence of fat globules and heat shock resistance, among others.

Emulsifiers also play an important part in ice cream’s stability, as does partial coalescence.  Emulsifiers and proteins, with their hydrophilic and hydrophobic ends, coat the outside of fat globules as they are sheared during whipping. But, because protein molecules are very large, there’s a steric hindrance causing fat molecules to collide and bounce off one another, explained Marshall.

As the molecules of emulsifiers are much smaller than that of protein, fat molecules will still collide, but also maintain their globular shape and stick together. This is called partial coalescence. While proteins and emulsifiers compete for the interface on fat droplets to some extent, emulsifiers usually win out, noted Marshall. “You should have enough protein displaced by the emulsifier to have that connection (i.e., partial coalescence) take place,” he added.

“High-protein ice creams are striving to be more nutritious by maximizing protein, while minimizing fat and sugar,” said Marshall. In effect, these products are typically low calorie, zero or low sugar and lower in fat.

High-protein ice creams are subject to various problems during processing and throughout shelflife. Processing issues involving foaming and thickness can occur, for instance. Proteins act as foaming agents, so when the protein content is higher, foam (i.e., trapped air) needs to be minimized during mixing, prior to pasteurization and homogenization. “Air in the mix can lead to pumping issues and irregular heating,” explained Marshall. “Cold-water activated gums (e.g., guar, xanthan, etc.) create a viscous mix making it very difficult to release foam once formed,” he added.

As high-protein ice cream tends to be lower in sugar and sugar is one of the greatest contributing factors to freezing point depression, issues related to hardness can occur. As Marshall illustrated, ‘there is a large portion of water in ice cream that remains liquid, but it contains all soluble components—sugar being one of those soluble components. If you don’t have low freezing point depression, your ice cream is going to turn into a rock.”

Shrinkage over time, where the ice cream pulls away from the outside of the container, is a complex issue involving air cell stability and thermal/altitude shock. Protein type and concentration play a large role in shrinkage. Poor foam stability leads to the development of a lot of air, resulting in potential shrinkage, noted Tammineedi. While this issue can occur in any type of ice cream, it is more often associated with high-protein formulations.

Proteins can affect sensory issues as well, contributing off flavors and viscosity—creating a thick, soggy, gummy product. “You don’t want to have to ‘chew’ the ice cream, as we call it,” said Marshall. “Optimizing the type of protein, sweetness, flavor and fat level can help mitigate any off notes associated with the protein,” he added.

A variety of solutions are available to offset other inherent problems associated with high-protein ice cream, aside from off-flavor issues previously mentioned. Regarding foaming and viscosity, heat-activated gums such as locust bean and tamarind seed gums maintain low viscosity and will only increase in thickness during the pasteurization step.

Use of an antifoaming agent can help release foam. Time and gravity will eventually cause the air to collapse on itself. “Give 30 minutes for hydration but give it time after that to ensure the mix is as dense as possible without trapped air,” recommended Marshall.

Proteins not only need to be well blended and hydrated properly, but also have adequate heat stability. Different proteins have different heat tolerances. “Concentration is also important. Make sure you don’t have a spike in viscosity during processing, as this can lead to blockage in the press, shutting down the whole system,” emphasized Marshall.

Click here to view Part 2 of the webinar summary on “Formulating Excellent Quality, High-Protein Ice Cream,” which focuses on the use of IdaPlus 1085, a functional MPC developed specifically for the creation of optimal high protein ice creams.

Click here for past and future Global Food Forums’ Webinars